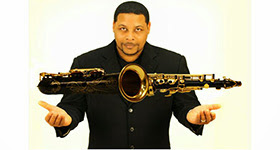 Delton Has appeared in Downbeat and Jazz Times magazine Delton Walker is an artist in the Jazz circuit that combines elements of Jazz, R&B and Funk.

He is not only a Jazz artist but is also devoted to his community, often playing charitable events. Delton continues to develop his talents and is fortunate enough to garner the appreciation of critics and fans..2013 Delton released he’s new CD “Back On Track” featuring a tribute to NASA Astronaut Ron Garan of Soyuz Space Mission with track “Flying Soyuz” and to all US Military Service members with “Never Too Far Away” itunes,  cdbaby,  Facebook