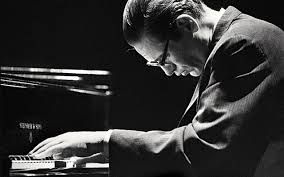 Born in Plainfield, New Jersey, in 1929, he was classically trained, and studied at Southeastern Louisiana University and the Mannes School of Music, where he majored in composition and received the Artist Diploma. In 1955, he moved to New York City, where he worked with bandleader and theorist George Russell. In 1958, Evans joined Miles Davis's sextet, where he was to have a profound influence. In 1959, the band, then immersed in modal jazz, recorded Kind of Blue, the best-selling jazz album of all time.[3] During that time, Evans was also playing with Chet Baker for the album Chet.

In late 1959, Evans left the Miles Davis band and began his career as a leader, with bassist Scott LaFaro and drummer Paul Motian, a group now regarded as a seminal modern jazz trio. In 1961, ten days after recording the highly acclaimed Sunday at the Village Vanguard and Waltz for Debby albums, LaFaro died in a car accident. After months of seclusion, Evans re-emerged with a new trio, featuring bassist Chuck Israels. ~ Wikipedia
on January 03, 2018
Email ThisBlogThis!Share to TwitterShare to FacebookShare to Pinterest
Newer Posts Older Posts Home
Subscribe to: Posts (Atom)