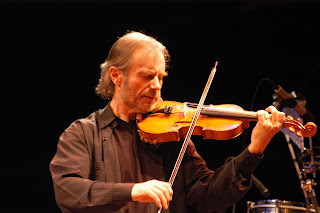 Jean-Luc Ponty is a pioneer and undisputed master of violin in the arena of jazz and rock. He is widely regarded as an innovator who has applied his unique visionary spin that has expanded the vocabulary of modern music.

Ponty was born in a family of classical musicians on September 29, 1942 in Avranches, France. His father taught violin, his mother taught piano. At sixteen, he was admitted to the Conservatoire National Supérieur de Musique de Paris, graduating two years later with the institution's highest award, Premier Prix. In turn, he was immediately hired by one of the major symphony orchestras, Concerts Lamoureux, where he played for three years.

While still a member of the orchestra in Paris, Ponty picked up a side gig playing clarinet (which his father had taught him) for a college jazz band that regularly performed at local parties. It proved a life-changing jumping-off point. A growing interest in the jazz sounds of Miles Davis and John Coltrane compelled him to take up the tenor saxophone. Fueled by an all-encompassing creative passion, Jean-Luc soon felt the need to express his jazz voice through his main instrument, the violin.