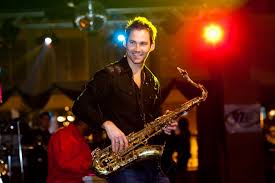 Emerging onto the smooth jazz scene in 2012 much traction has been made by the efforts of saxophonist and businessman, Phil Denny. Some might describe him as a people’s musician having developed a very active and loyal fan base even before the release of his internationally recognized 2012 debut, Crossover; an album which has already earned him two Billboard charted hits. A buzz has been rippling from coast to coast as either his music or marketing prowess reaches those who follow smooth jazz almost always earning him a new fan. Described as a passionate and soulful player who has a way of captivating audiences with his smooth, sexy yet energetic style. In fact, Phil has sold out every show he has produced since the summer of 2012 and continues to build quite the international following.

After spending more than half a decade as vice president for a mortgage broker firm, Phil decided it was time to concentrate his efforts on his passion for music, a decision that has already led to some incredible opportunities. Although no stranger to the stage, he was eager to take his music to a new level and do so independently while relying on his business experience and trusted industry friends to guide him.

Crossover, Phil’s debut release was described by Critical Jazz as “an album that works on every imaginable level from sophisticated cover art to a non pretentious approach to where contemporary music should be heading.”

The acceptance of the album was immediate and “Push,” the vibrant first single to radio debuted at #29 on the Billboard Smooth Jazz National Airplay chart and later peaked at #21 as well as spent more the 20 weeks on the SmoothJazz.com charts. Currently at radio is the up-tempo “Traffic Jam” which debuted #30 on the Billboard Smooth Jazz National Airplay chart and has since risen to #25 and can now be heard nationally on Sirius XM Watercolors. Crossover, produced by Grammy nominee, Nate Harasim, was bred to be a powerhouse debut that not only highlights the proficiency and flair of Denny, but his mastery of infectious lyricism. The project also welcomes a host of musician friends to round out the experience including trumpeter Cindy Bradley, guitarists Nils and Matt Godina, bassist Terrance Palmer and vocalist Anna Stevenson. This ten-track debut demonstrates a level of artistry that has been described as parallel to veteran artists in the genre, though brings on a fresh new vibe. Reverbnation
on August 13, 2015
Email ThisBlogThis!Share to TwitterShare to FacebookShare to Pinterest
Newer Posts Older Posts Home
Subscribe to: Posts (Atom)