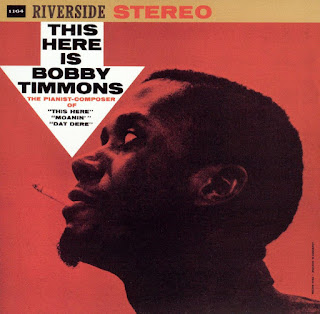 Bobby Timmons was known for his funky style, and as one of the founders of soul-jazz. This is his début as leader.
This is a classic Riverside set that has been reissued on CD in the Original Jazz Classics series. Pianist Bobby Timmons by early 1960 had already had successful stints with Art Blakey (where he contributed "Moanin'") and Canonball Adderley (writing "This Here" and "Date Dere").

For his first recording as a leader, Timmons (whose "funky" style was beginning to become very influential) performs those three hits along with his own "Joy Ride" and five standards in a trio with bassist Sam Jones and drummer Jimmy Cobb. Always more than just a soul-jazz pianist, Timmons (who effectively takes "Lush Life" unaccompanied) became a bit stereotyped later in his career but at this early stage was at the peak of his creativity.
on June 19, 2018
Email ThisBlogThis!Share to TwitterShare to FacebookShare to Pinterest
Newer Posts Older Posts Home
Subscribe to: Posts (Atom)