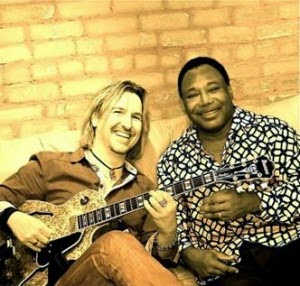 U-Nam, is destined to become one of the most controversial musicians.In the few recordings that I have heard, there is a conviction towards making himself felt by the general public, and the critics alike.  It’s great to have a new voice on the guitar scene; one that is loaded with energy and excitement.”
-Ten time Grammy Award recipient, NAE Jazz Master and Guitar legend, George Benson-
Born and raised in Paris / France, U-Nam began playing the guitar at age 12, and studied for three years at the Paris-based CIM – the first European school for jazz – between 1986 and 1989. At age 19 he turned professional, becoming a fixture at Paris studio sessions.
on April 10, 2012
Email ThisBlogThis!Share to TwitterShare to FacebookShare to Pinterest
Newer Posts Older Posts Home
Subscribe to: Posts (Atom)