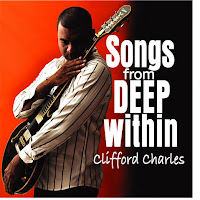 Whenever you ask what’s his passion, smooth jazz guitarist Clifford Charles, declares “It’s music or nothing”. This definitely shows as scores of fans of his home-grown brand of silky-smooth, Caribbean Jazz music convinced that Clifford is set to take on the world.

Clifford is a music teacher and performer, who has performed with the Legendary RnB group the Drifters. In 2000 with the big band Horizon which featured composer Anslym Douglas of the hit song "Who Let the Dogs Out." / Ba Ha Men. You can catch Clifford Charles on cdbaby

Video for Promo use.

on February 02, 2012
Email ThisBlogThis!Share to TwitterShare to FacebookShare to Pinterest
Labels: JAZZ GUITARIST

Mike and Harold Brown, two brothers from the south side of Chicago are the founders and driving force behind the jazz/funk group Everett B. Walters. Their funky, smooth and danceable rhythms out stands everyone. Their first single Always High Reaching featured Keyboardist, Brian Simpson on the title track.  the

Always a crowd pleaser, Everett B Walters has appeared with or opened for such notable artists as Boney James, Boyz 2 Men, After 7, Joe Sample, Rick Braun, Everette Harp, Jeff Lorber, Tom Scott, Russ Freeman and The Rippingtons and the late Bernie Mac. Everett B Walters continues to be a favorite in and around the Vegas area at various venues and several radio station events hosted by Koas 105.7 The Oasis and Kxpt 97.1 The Point.h Jazz a