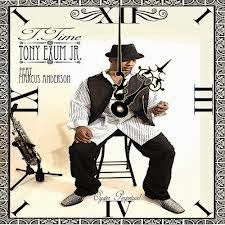 TONY EXUM, JR. brings to mind the soufulness of David Sanborn, the sensual sounds of the late Grover Washington Jr. and the silky sounds of late George Howard.

Tony Exum, Jr. felt much the same in releasing his debut album of that name.

In 1996, Exum joined with Meadowlark Jivin', a funk-filled jazz/blues/soul group local to Ft. Collins, CO and spearheaded by Brian Hull and, continued touring and recording with them for 7 years. Throughout it all, he had also stepped out on his own within the Colorado music scene and soon found himself opening for and performing with such notables as the Temptations, the Four Tops, the Manhattans, Chieli Minucci & Special EFX, Nelson Rangell, Marion Meadows, and many others.  Website