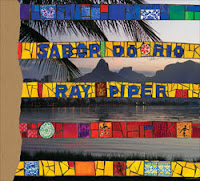 Ray has travelled to Brazil many times, concentrating on exploring different areas of the country and their unique musical styles. Ray record the CD “Ray Piper Sabor Do Rio” which was a culmination of the previous trip and was recorded in Rio and completed in Vancouver. He wrote additional material for the CD which was recorded with Ronaldo do Bandolim, Marcilio Lopes, Rogerio Souza, Eduardo Neves, Jorge Helder, Erivelton Silva, Jorginho Silva, Durval Pereira , Kiko Horta, Jaimie Vignoli, Tom Keenlyside, Michael Creber, Joao Hermeto and Fernanda Cunha who wrote the lyrics to the Bossa Novas. The tunes he composed reflect a jazz player's love of the music and people of Brazil.